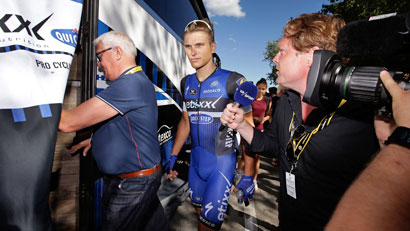 2016-07-14
Pure relaxation, flying blind in the mountains and hectic in the echelons. That is the quick description of the my last three days.

The rest day in Andorra was like a wellness vacation, which we all really needed after the very hard first Tour week. A short ride, massage, good food, sleep. It was beautiful. Unfortunately things were different directly the next morning. We had to immediately go up a 2400 meter mountain. And the fog was so heavy that you could barely see anything, we rode according to our Garmins - that is, we let out GPS guide us and steered the curves according to the map. That was really crazy.

Yesterday it unfortunately didn’t work our for the mass sprint. Around 11 km before the finish, Sagan and a teammate started an attack out of the echelon and Froome and a helper went with them. The gap was never very big but many teams working together were not able to catch them. In the end they won by six seconds.

The stage was really very hectic and nervous. Echelons always cause nervousness and the fight for position, because no one wants to be behind when the field splits. In addition, there were many narrow streets in the villages, which are not really optimal for a large peloton like in the Tour. At any rate, you had to be highly concentrated the whole day and you barely had time to take your hands off the handlebars. But respect for the breakaways. That was impressive.

Today it goes up the bald mountain, the Mont Ventoux. I’ll be that there won’t be a mass sprint ;-) (Irony)