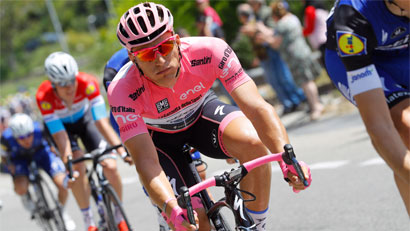 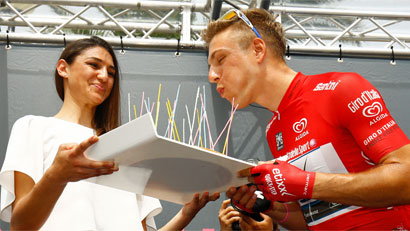 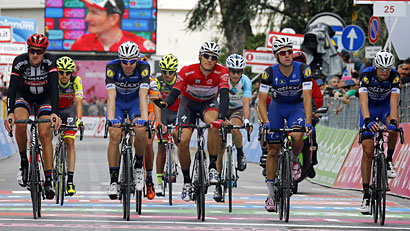 2016-05-14
With an eye to the long season still to come, together with the team I have decided to leave the Giro. After the difficult past year, I started this season early to work on my comeback. Now it is time to take a break, because it is still a long way to the World Championships in October in Qatar. And there is a rare chance for the sprinters to take the rainbow jersey.

Here at the Giro I had a great and successful time with the guys. I could win two stages and wear the leader’s jersey. We even celebrated my birthday on the fifth stage, even if the 233 kilometer long party was pretty exhausting ;-) Yesterday I was unfortunately stopped by a puncture five km before the finish. Otherwise I might have been able to bring in another win. I had purposely forced myself over the final climb, but with a puncture so close to the finish it is almost impossible to get back up front. The field was racing at 60 km/h with backwind towards the finish. You would have to ride 80 km/h to catch them and that is not possible.

It is hard for me to leave the team today of all days, because Gianluca Brambilla not only had a fantastic in but also brought back the pink jersey. The mood is great and I wish everyone a great Giro. But that will surely be the case anyway. The fans along the way are really great and the organizers have done a good job.

But the decision has been made. I will soon do an altitude training camp and prepare for the rest of the season. I will get back to you again and report on how I am doing.