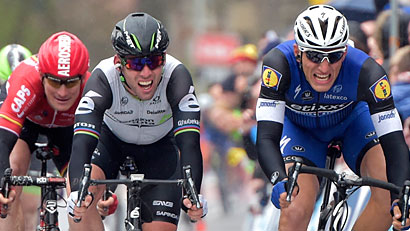 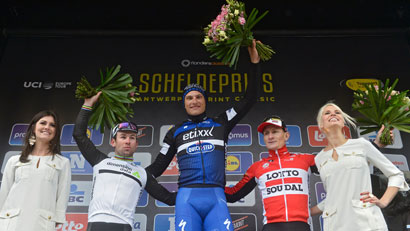 Winning the Scheldeprijs for the fourth time

2016-04-07
For the fourth time I have won the Scheldeprijs. No other rider has ever done that before. But in addition to the record, I am of course especially proud that in this Belgian Holy Week, I could give our team this win.

It was a hard race with lots of side winds and rain causing unfavourable conditions in the finale. Despite the flat profile, it was not an easy race. You can see that because at the end, the field was not particularly large. There were a lot of attacks and breaks, but the sprinter teams didn’t let them succeed.

Many thanks to the team, which rode magnificently. I am very happy to be able to top off this team performance with the win. It is always something special to win this race, which is known as the sprinter’s world championship. And having Mark Cavendish and Andre Greipel on the podium with me shows the class of this race.

It was also something very special because my girlfriend Tess was there for the first time. I think she had a great day, could ride in the team car and saw me celebrating at the end.

I will now rest for a few days, train and then get back into things at the Tour de Romandie.