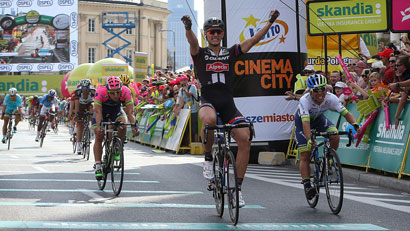 2015-08-02
This win felt so good. After the difficult last few months, I am happy and proud that I could do it again today. I never gave up, always believed on myself and today I could rejoice again. The feeling is fantastic.

Thanks also to my team, which supported me perfectly and brought me up to 350 meters.Then I opened the sprint, because I absolutely wanted to go through the final curve as first. 70 meters before the finish we faced a 90 degree curve – which is actually irresponsible. Since we had already ridden through the finish and so could prepare ourselves, I had come up with a plan. I wanted to go into the curve on the far left outside, so that I would take enough momentum with me. I did that, when Caleb Ewan went inside and was in front of me. But he was too fast for the short way, had to brake and I stepped on it again, passed him and even before the finish line could take my hands off the handlebars. Awesome!

Since the win also gave me the yellow of the leading rider, we as a team are in the position of having to control the race tomorrow. But we wanted to do that anyway, because it will be flat again and offers the next chance for a sprint.