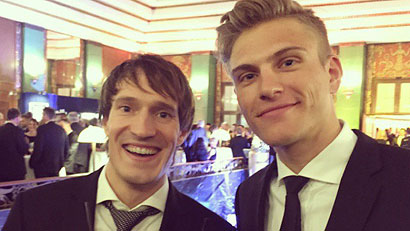 Athlete of the year in Thüringen and eighth in Germany

2014-12-22
Athlete of the year 2014 in Thüringen! Thank you to everyone who voted me to this honour again, like last year. This award means a lot to me, because it is not just a vote by sports journalists and sports federations, but also by the public in my home area.

Congratulations too to Kristina Vogel, who won the best female athlete title. That gave cycling both first places. And of course congratulations as well to the women’s handball team of the Thüringer HC, for winning the team of the year.

I already had good news the day before. I am satisfied with eighth place in the election for German athlete of the year. Men’s cycling is once again in the top ten. I see that as not just an acknowledgement of my performance but also of the consistent path that we of the new generation of clean cycling are following.

The gala in Baden Baden was great, by the way. Occasions like that are good opportunities to get to know top athletes from other sports.