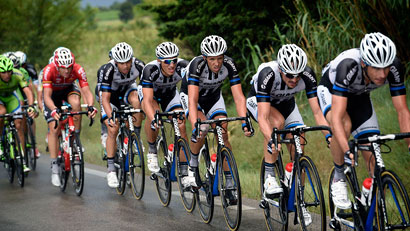 Going into the last week

2014-07-22
Six days to go and still two chances for winning a sprint. But it will really be a hard last Tour week. The Pyrenees are waiting for us, and it all starts today.

The rest day was good. We trained a little, took a break in a cafe and otherwise just relaxed at the hotel, which this time was really quite nice.

The last sprint before the rest day didn’t go optimally, with a lot of factors playing a role. It rained so hard in the finale that you could barely see the road, there was water standing everywhere and it was also very slippery, because it was the first rain in a long time. The dust that had gathered on the road had turned into a slippery soap. And it nearly caught me in one of what seemed like 50 roundabouts at the end. I had already clicked out of my pedals and both wheels had slipped away. What kept me upright, I’ll never know. Maybe my guardian angel.

Because of all of this, the team was not in a position to form the train. Everyone was all over the place and it was chaotic. In the end I was alone too early, had to wait and look for a rear wheel. Then I chose the wrong one and was too far behind, so that I had no chance in the sprint. But my legs are good, and I am actually quite optimistic about this last week.