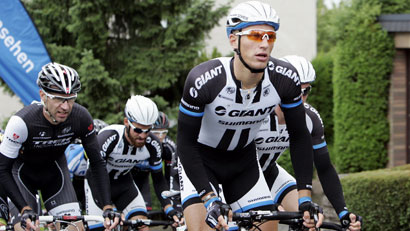 Cramps a good omen for the Tour?

2014-06-29
As in the past championships, it once again did not work out with a good placing. Like last year, cramps stopped me. I don’t know why it happened. Perhaps it is a delayed effect from the altitude training. They say that at some point you can still have a down phase.

In addition, the race wasn’t as easy as it appeared to be at first. The pace was very high, I was in the wind several times, and Tony hurt me pretty much, when we had to ride behind him. I was only in the group to neutralize it, but the tempo was crazy. We came within 15 second and then simply couldn’t get closer. He was going like a motorcycle.

Maybe I drank one bottle too few. But I am not worried. On the contrary. Actually it is a good omen, that things didn’t go well today. As I said, in the last years it has gone similarly at the German championships and therefore at the Tour, for example in 2013, that much better. So let’s think positively.