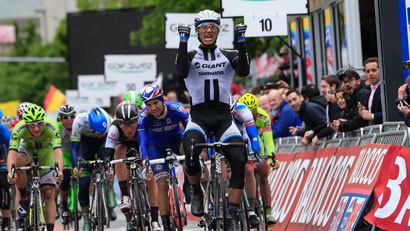 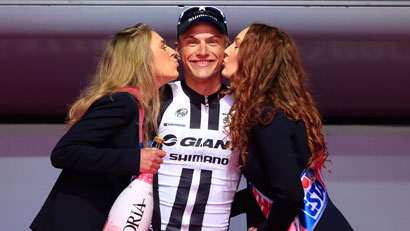 First stage win at the Giro!

2014-05-10
Awesome. It worked. A stage win at the Giro. I'm so delighted that the pressure is all gone at the beginning of the Giro already. Well, not all gone, but I feel less of it now. Of course I want to win again. Often it is like that, once you took the first win, you can do it again.

The leadout was not perfect today. With 300 metres to go, there was a turn, where all the teams went full gas to be the first on the stretch and to bring their sprinters in front as good as possible. I was a little bit too far behind, but nevertheless I was able to come round the others and pulled off. It feels fantastic, that I was able to do so.

The way to the finish was no fun. I was motivated, though, but there was a lot of rain and it was very cold. Although I wore two rainjackets I was freezing. And then you have to force yourself to eat and drink as much as possible, because your body needs a lot of energy to keep warm. When you do not think of it, you will not have enough power for the finish.

That I am one of those cyclists now, who have won stages at all three Grand Tours, makes me feel very proud.

It can go on like this. I am going to click glasses with my team mates now.