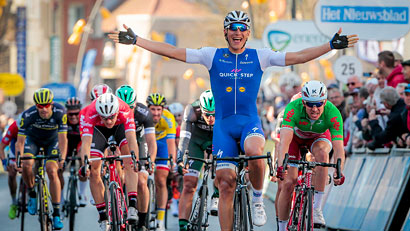 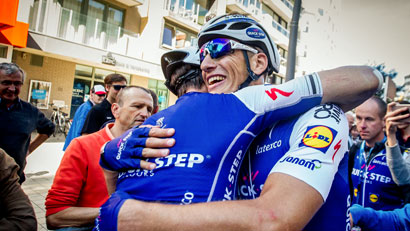 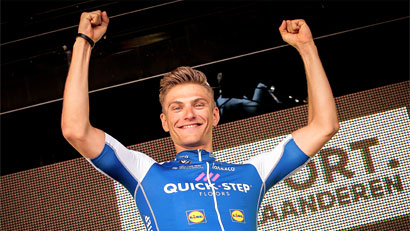 Victory at the Three Days of de Panne

2017-03-30
Crash, chasing back, win. What a finale in the next-to-last stage of the Three Days of de Panne! Crashing 15 km before the finish is really a bad idea. Of course a crash is never gun, but the chances of getting back up front so close to the finish are really not good. To add to that, I couldn’t start up again directly. A brake handle had broken off and the handlebars were awry, so I had to wait for a replacement bike. But we absolutely wanted to catch up again, so went all out with the guys after the field. I thought, if we are back in the pack at the start of the final lap, then we still have a chance – and we made it.

Then of course we still had to work our way up to the front and were within striking distance only a few hundred meters before the finish line. The guys who had waited for me rode like there was no tomorrow and delivered me perfectly. The last curve was very tight but I knew that the first three had invested a lot to get into this position and probably would fade. I was in about eighth place, went quickly into the wind in order to get on Kristoff’s rear wheel and then sprinted past him. It was a huge relief at the finish.We wanted this win and we finally got it. I think that I had an extra portion adrenaline in my blood after the crash. It was such an incredibly feeling to be brought back to the field after the crash, then simply fight my way up past the others and finally to win the sprint. That was fun. And I am proud to have a team that can pull that off. Thanks!

All in all I felt very good today from the start, was very awake and fresh and all day my legs were good. That would never have happened today without a good form. That I am in good condition could be seen in my fourth place in the closing time trial. I didn’t want to simply ride along and went all out. In the end I was only three seconds behind the winner Durbridge. I am leaving this race with a lot of self-confidence and really enjoyed the day, especially win we also won the overall title with Philippe Gilbert. Those were three great days for our team.